Influence and Development of the Club 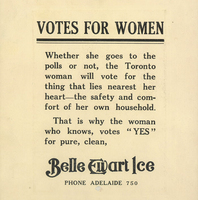 Figure 16: Municipal Voting in Toronto
The Toronto Women's Literary Club brought the topic and problem of women's rights and social responsibilities into the spotlight, but only achieved a couple immediate changes for women in Canada. Even though they put a lot of hard work to reach their ambitious goals, and tried many times to gain a "fan base" to say, the organization remained confined to Toronto for fifteen years. They only started to target a larger audience when they merged with the National Council of Women. The council started to develop local councils of women in communities, and the local councils would gather and support the fight for women's votes. Thus, the fight for women's suffrage became a national topic.

Although certain women were granted the right to vote in municipal elections (if they were not married or owned property) in the late 19th century, it wasn't until 1916 that all women were allowed to vote. Thus, the original goals of the Toronto Women's Literary Club was finally obtained. Prairie women were allowed to vote in 1916, British Columbia and Ontario women in 1917, Nova Scotia women in 1918, New Brunswick women in 1919, Prince Edward Island women in 1922, and finally Newfoundland women in 1925. Quebec women were the latest the be allowed to vote as they were only allowed until the 1940s. As for the federal votes, the Military Voters Act allowed women who had worked as nurses to vote. Later on, the Wartime Elections Act gave wives, widows, daughters, sisters, and mothers of people who had served in the military or naval forces the right to vote. Finally in 1918, the Women's Franchise Act gave the federal vote to women, 21 years of age and up and that were British Subjects, the right to vote. 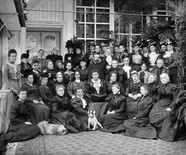 Figure 17: The National Women's Council with Lady Aberdeen in 1898
As stated before, the Toronto Women's Literary Club merged with The National Council of Women. The National Council of Women was an organization that believed that women should get the vote, not because of equality with men, but because of the fact that this would make their told of a mother more effective. They also believed that middle class women that volunteered to help with social reformation and public health shouldn't be questioned. This thought/opinion lead many women to join/support the campaign, and the organization did indeed achieve the acceptance of these women. However, the idea of gender equality of women rights to men was definitely overlooked. But since the campaign only specified that "Middle Class women" could discuss the topics of women's rights, women of other races, especially immigrants and poor women, were excluded from these discussions.

The conservative nature of the organizations can be seen in the racist policies for supporters of the women's movement in the 19th and early 20th centuries. This was because this time era consisted of a lot of racism, and there was a lot of racism in society at the time. An example would be that the campaigns would say that they are advocating for the rights of all women, but in reality it was really just for white women. Aboriginal and Asian women were never stated that the suffrage would apply to them. And although there was never an official document saying the Native women could vote, they lost the ability to vote in 1869 when their husbands and fathers lost that ability. Aboriginal and Asian men were both stripped of the right to vote by the end of the 19th century. Many middle class white women agreed with this decision and didn't fight back, as they thought that it was because of their class and race that they were worthy to vote. Quebec women however, had been allowed to vote until the 19th century, when they were stripped of the right. And because of conservative politicians, the Quebec women were the last in Canada to be able to vote.

In conclusion, despite the efforts for democracy and equality, the 19th century Canada remained a society were certain groups were considered less than others. The grouping of how women were less than men was the most normal part of the society. Women's increased active role in the problems of poverty, disease, and unemployment eventually convinced other people that women would be beneficial in maintaining the society. It was the women's support for the war that finally convinced Canadians that women could be relied on the support the goals of the majority.
Powered by